We are proud to announce that our shelties, Aristomilago Meteor Fantasy, JDX, ADX is awarded two BIG yearly award. 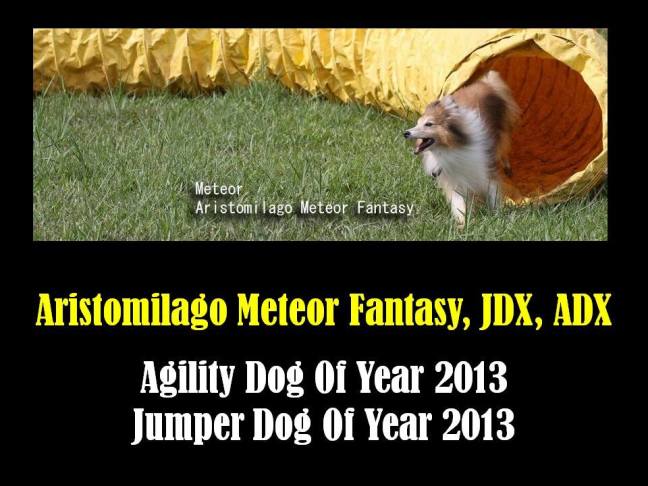 JJ, Prince and Meteor are invited to Pet Asia Agility Cup 2013. The event was held at Marina Bay Sands.

Upon entering the hall, this is NOT wat i luv to see cos no carpet 😦 We have the 1st round which is knockout match only 6 fastest dogs of the cat will go for the final. Prince was the 1st dog and this crazy old man just ignored the slippery ground, he looks like skating in the ring, he missed his weave and knocked one bar. 2nd to go is JJ, a smart girl indeed, after 2 jumps , she decided not to run and jump, she choose to walk and jump. The only time she run was at the dog walk , A frame and teeter. Last dog was Meteor, he was not as crazy as Prince, however he also having difficult in doing the weave and every jumps, you could see him slide and he trying his best to brake. End result , Meteor got the fastest timing and followed by Prince.

Meteor and Prince, both went into the top 6 and had their final run. Due to the lesson learnt from the 1st round, for 2nd run, used different technique inorder to assist the boys from sliding, slip etc but at the same time they could run fast. With the changes, Prince successfully weave through the poles and jump without knocking down the bar. However sliding after jump was still unpreventable. Prince managed to get a clean run with fastest timing. As for Meteor, he made a fault. With that, Prince won the 1st placing with his fastest timing follow by Meteor, 2nd . So proud of my two old man, as they are competing against the young promise dogs.